Here you were, at home and in comfort, chatting freely to people around the globe with no delay, no entry barriers and no feelings of inconvenience.

Today, we take that real-time connectivity for granted. Chat rooms may be a thing of the past, but instant digital chatting has never been so prevalent.

Here, we explore the rise of instant messaging, and how chat is shaping global communication trends to this day.

If you wanted instant communication before the internet era, you’d be reliant on the telephone. That reliance could prove costly.

Any calls outside your area, for example, resulted in off-putting long-distance fees… often with poor lines and jarring sound lags.

That’s not to mention the difficulty of adding participants. For most of us, multi-person conversations meant complications, and often weren’t worth the trouble.

As indispensable as the landline telephone was back then, your conversations would typically be limited to local calls during sociable hours, between two participants only.

The internet changed the world as we know it, with communication being a prime example. Suddenly, anyone with access to the web could open a window and begin chatting with people across the world.

A new language of acronyms was born – with people “lol”ing at strangers in chat rooms, opening conversations with “A/S/L?” and asking anonymous users “wuu2?”

Suddenly, international communication was at your fingertips. Even better, it was instant and inexpensive.

This was a new wave of comms – and one that can only be described as revolutionary.

The rise of IM programs

AOL launched AIM in 1997. Yahoo! Messenger followed in 1998. Then came MSN in 1999. The rise of these programs cemented instant messaging in popular culture, and formed new habits for getting in touch with friends.

Teenagers in the early noughties would race home from school to log into MSN and begin chatting with their friends.

And it wasn’t just teenagers: instant chat was appearing as a feature within business software packages like Lotus and Oracle, and being adopted by techies and stay at home parents alike.

Instant messaging had become the new norm. It was fun and fresh, but it was also a firm fixture of day to day life.

The boom of the internet went hand in hand with the boom of social media. Savvy social media networks were by no means ignorant of the changing face of comms, and helped proliferate the rise of real-time.

In 2006, Myspace developed MySpaceIM. In doing so, it became the first social network to incorporate instant messaging – but it certainly wasn’t the last.

Today, for example, most people use Facebook Messenger as a staple communication channel. Believe it or not, that channel has been around for over a decade.

First launched as Facebook Chat in 2008, this social IM channel allowed users to live chat to friends or groups.

Most of us are old enough to remember the emergence of the smartphone. As the noughties came to a close, smartphones had become commonplace. And with them came apps.

Apps such as iMessage, BBM and WhatsApp helped progress the instant messaging trend further, and saw live chatting entrenched deeper and deeper into our daily lives.

For the younger generation, instant messaging was something they were simply born into; the quickest, most convenient and most commonplace way to communicate.

Clearly, this shift didn’t happen overnight. Businesses had many years to react to the real-time revolution – and react they did.

Today, you’ll be hard pushed to find a large call centre that doesn’t employ live chat software as a service channel. And it’s not only service teams that use live chat.

Most tech-savvy ecommerce websites come complete with a live chat option splashed up-front on the bottom right of their websites, offering the promise of immediate assistance, instant connectivity.

Chat has even muscled in on the internal company messaging scene, with more and more companies embracing workplace IM systems like Skype, Slack and Teams.

Our taste for real-time has led to increasing impatience. As consumers, we expect companies to be available, accessible, and immediate in their assistance.

The rise of instant messaging is ramping up, but many companies don’t have the resource to meet 24/7 expectations.

It is against this backdrop that chatbots have entered the fray.

Chatbots are not yet a fixture as commonplace as WhatsApp or live web chat, but they’re on the right side of a huge growth arc. As they continue to evolve, they’ll be capable of increasingly elegant communication.

From SmarterChild to Siri, the bots we talk to have already come a long way – and there’s still scope for growth.

Can the rise of instant messaging continue?

The original appeal of chat rooms was instant connectivity to another human. So could bots and AI, in removing that human connectivity, obstruct the instant messaging they seek to improve?

For the time being, the rise of instant messaging shows no signs of slowing. The telephone has altered as a primary, first-line service channel, the live chat software market is booming, and we still live in our various messaging apps.

The future depends on how well technology can be blended with the human touch. We still want real-time, but not at the cost of real, personalised interactions. 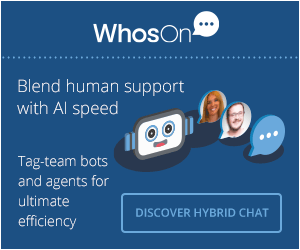