Retyping the same reply over and over is tedious. It uses up your mental energy. It wastes agent time and, by extension, the time of the visiting chatter, too.

That’s why live chat software comes with handy tools like canned responses and AI-auto text. But what about the messages you didn’t plan for? That’s where WhosOn’s suggested response comes in.

But what is suggested response? We take a closer look.

What is WhosOn’s suggested response?

WhosOn’s suggested response feature is a bit like the predictive text function on your phone, but for your chat channel.

Like predictive text, it suggests messages based on the things you’ve typed before. Once you start typing, WhosOn will display relevant replies — which you can then select and immediately insert into the chat.

Suggested response is a feature for agents to use. And, as with any feature an agent can use, is one that can bring subtle benefits to chatting visitors.

Agents will see and use this handy feature during a chat session. Specifically, when they are replying to visitors with an answer they’ve typed before.

This means a shorter response window, so customers get their answers faster.

How does it work?

WhosOn can recall the last 500 messages each agent has sent. This provides the bank of information that WhosOn uses to power suggested response.

So, once an agent has typed at least three letters of their response, WhosOn searches their past 500 responses for a match in real-time. When such a match is found, WhosOn suggests the response to the agent. The agent then needs only to click to insert the suggestion into the chat.

This means that suggested response tailors itself to each agent. If an agent talks about a topic with customers a lot, their response is all ready to go.

Why is it useful?

Suggested response is a great time and mental energy saver. It reduces the need for repetitive retyping of frequent messages.

Not every frequent message is one that you’ll have a canned response planned for. (For example, let’s say your service is experiencing unexpected downtime, and you’re having to keep explaining the problem to a flood of customer queries.) In such instances, suggested responses are a godsend.

Additionally, they help maintain a consistent level of service from each agent. The messages agent Y sends about product B are always the same.

Typing the same thing over and over is tedious and wastes time. But you can’t plan for every repetitive message your agents will need to send. That’s why suggested response is a great timesaver for agents. And it’s just one of the many features that WhosOn has to offer.

Why not explore further, with a 30-day free trial? 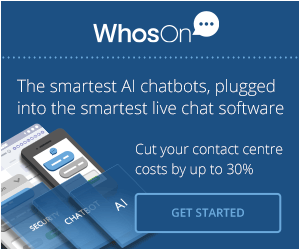